I was reminded today how vital teachers are to the future generations of this great nation of ours.  Teaching is not just about what we do every day in front of 30 (or more) students, delivering good quality teaching and learning experiences that inspire the next generation to believe that anything is possible.  We are also there to protect the vulnerable, support those who need it, and be the one true stabilising force in some young peoples lives.

In amongst the blur of a CPD day that included WRAP training, an awesome session on staff #wellbeing (that brought me to tears at the end), and the joy of winning the argument about sexist products with @EE (see previous post), I did something that was even more important – supported a student that needed my help.

Since becoming a parent (my eldest is now 7), it has heightened my feelings of protectiveness towards the students in my care.  We are so vital to their emotional and physical wellbeing, that it makes every crossed word, every tiny interaction, that much more powerful and important.  I would urge all teachers to remember that for some students we are one of their safest places, we are one of the only constants in their lives, and this is perhaps the most vital part of the job that cannot be measured by Ofsted, league tables, or any other accountability measure, but it is this role that can have the most profound impact on a young person.  It is for some, more important than the teaching and learning that we provide.

Wow – what we do really is vital.  The Government and Ofsted would do well to remember that it is not just the measured outcomes of schools that are important, but the way that we support the most vulnerable and get them to the other side of their dark moments.  After a day like today, this is what truly matters.

I am sorry that on your first week in your new role as CEO of EE you are faced with dealing with some outrageous and incompetent behaviour from one or more members of your commercial sales team.  I assume this is the Channels and Trading team led by Ettienne Brandt.

It seems that a bright spark within that team decided that the product – David and Goliath Blonde Phone Sock – I’m Too Pretty to do Maths was a good idea.  I can categorically reassure you that it is not.  Let me tell you why. 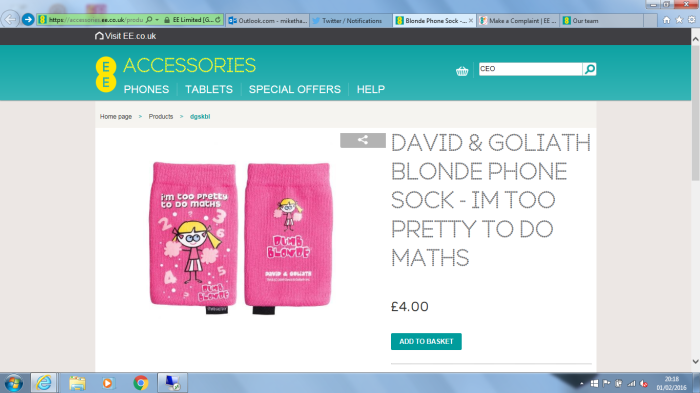 I have been teaching Mathematics to 11-18 year olds since 2002.  In that time I have become increasingly convinced by both my own opinions but also that of Government, Industry and all other stakeholders of the importance of Mathematical skills to the modern and fast moving national and global economy.  Employees who are able to demonstrate high levels of mathematical skill are amongst the most valuable members of most technology businesses.  EE is one such business.  If you looked around the boardroom table and asked your fellow directors who did well at Mathematics in school you’d be hard pressed to find anyone who didn’t.  I am therefore puzzled why a company that claims to be “building a responsible business” can be this irresponsible with one of the most important skills that their staff require to be successful.

I, along with large numbers of my profession work tirelessly to promote STEM (Science, Technology, Engineering, Mathematics) industries to our students.  We invite companies to speak to young people to encourage them to pursue a job in these vital industries.  We work with employers and training providers to encourage young people to take up apprenticeships.  We work with organisations that promote the importance of STEM to teenage girls in industries where the gender gap is significant.  I am therefore baffled that your company, one that wants to appoint 500 apprentices in the next couple of years, would send out such a terrible message to a large group of potential employees that being pretty is an excuse not to do maths.

I don’t want you to underestimate how passionately I, and a large number of the population, have been insulted by this message.  I love Maths.  I work tirelessly every day to encourage my students to love maths.  I promote this perhaps more passionately to female students because they are so badly represented in STEM careers compared to male students.  The thing to remember is that without the pioneering work of people such as Ada Lovelace in the 1800s, whose work on what has become known as computing resulted in a computer language being named after her; and Grace Hopper, the American Computer Scientist, who in the post WW2 era was one of the first programmers of the Harvard Mark I Calculator, and also developed the first compiler for a computer programming language.  Without these two women, the technology that we take for granted, and that your company has made many millions of pounds in profit from wouldn’t even exist.  I am therefore baffled that your company would chose to allow girls to be given this message that being pretty is an excuse not to do maths.

What I’d like to see happen is for this product to immediately be withdrawn from sale by EE.  Furthermore, I would like your organisation to publicly state your commitment to the importance of Mathematics to your company and that you are going to do more to promote this.  Finally, I think an apology to all those smart, attractive girls and women who work hard to be successful at maths because they see how valuable and important it is to their futures would seem appropriate.

I look forward to receiving your reply in due course. 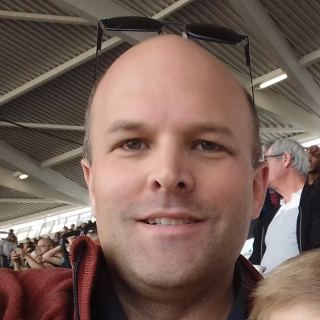 A Head of Maths in a secondary school in Wiltshire. Teaching for 17 years, Head of Maths for 7. This blog is about any aspect of education that interests me. ALL VIEWS ARE MY OWN AND NOT REPRESENTATIVE OF MY EMPLOYER OR LOCAL AUTHORITY

A collection of problem solving resources, organised by topic.